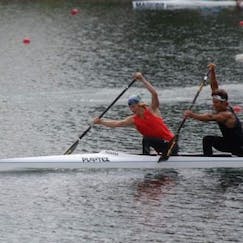 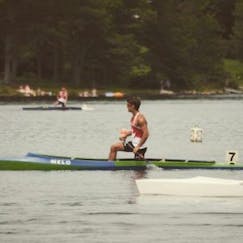 Brady Garcia – Sport has been his life for as long as he can remember. Being raised by a busy single mom, he was always in and out of gymnastics clubs, arenas and summer camps where he became a stronger person physically and emotionally. When his step dad came into his life, he helped him learn even more about work ethic and discipline. One day, his friend told him about sprint canoe. He fell in love with it instantly.

Being on the water on hot summer days with his friends hooked him, along with the seemingly endless challenge of staying balanced in the boat! Brady’s mom and step dad have always told him he could be anything he wanted to, so regardless of being smaller than everyone else, he decided he was going to the Olympics one day. Training full time has been character building and fun for Brady. His coach and family have supported and pushed him, and eventually he started seeing success.

Winning local regattas thrilled him and kept him wanting more! The first time Brady qualified for nationals, he got disqualified for having the wrong number on his boat. He was incredibly discouraged and heart broken, but those around him made it clear that overcoming this would pay off. Chasing teammates, challenging himself, and spending hours upon hours with his coach analyzing technique made him the young man he is today…heading to Junior Worlds to represent Canada on the Junior National Team. Because of Brady’s experience with sport he is overall a better person with a strong sense of character, discipline, and passion.

Brady was also recently truly honoured to have been selected by Team Alberta to carry the Alberta Flag at Western Canada Summer Games…..We are so proud to help support Brady`s journey to excellence and excited to follow his career!